Donald Miller’s tome Masters of the Air is finally coming to life on the big screen. It’s an epic story of the WWII heavy bomber boys in England, with a particular focus on the 100th Bomb Group – nicknamed “The Bloody Hundredth.”

Tom Hanks and Steven Spielberg are behind the mini-series. It’s positioned for critical acclaim, following in the footsteps of its predecessors Band of Brothers and The Pacific.

John Orloff, who also wrote episodes for Band of Brothers, penned the series. His Twitter feed hints at (and makes explicit, in some cases) the many years he’s poured into this project. Cary Fukunaga, Director of True Detective and the latest James Bond installment, is yet another heavyweight associated with the project.

Filming appears to have slowed down as of early 2022, and rumors have it the series will premiere as soon as late 2022.

Despite Apple’s public silence on the series, an impressive amount from filming has leaked on social media. All signs suggest the series will be spectacular, bringing the elusive air war to life – a task that’s never quite met the mark.

Want to go behind the scenes of the oh-so-secretive series? Keep scrolling for a gallery of the best snaps from set, culled from the depths of social media over the nearly year-long shoot.

And in case you missed it, check out this Business Insider article I co-wrote about Masters of the Air, which was the impetus for this post. Many of the photos below were collected while developing the BI piece. Because of the positive response to our article, a photo dump felt right to share here – aggregating the best photos from filming, with some history peppered throughout.

WHERE WAS MASTERS OF THE AIR FILMED?

A camera roll featuring the best of the best photos from sets, organized thematically.

FILMING INSIDE A B-17 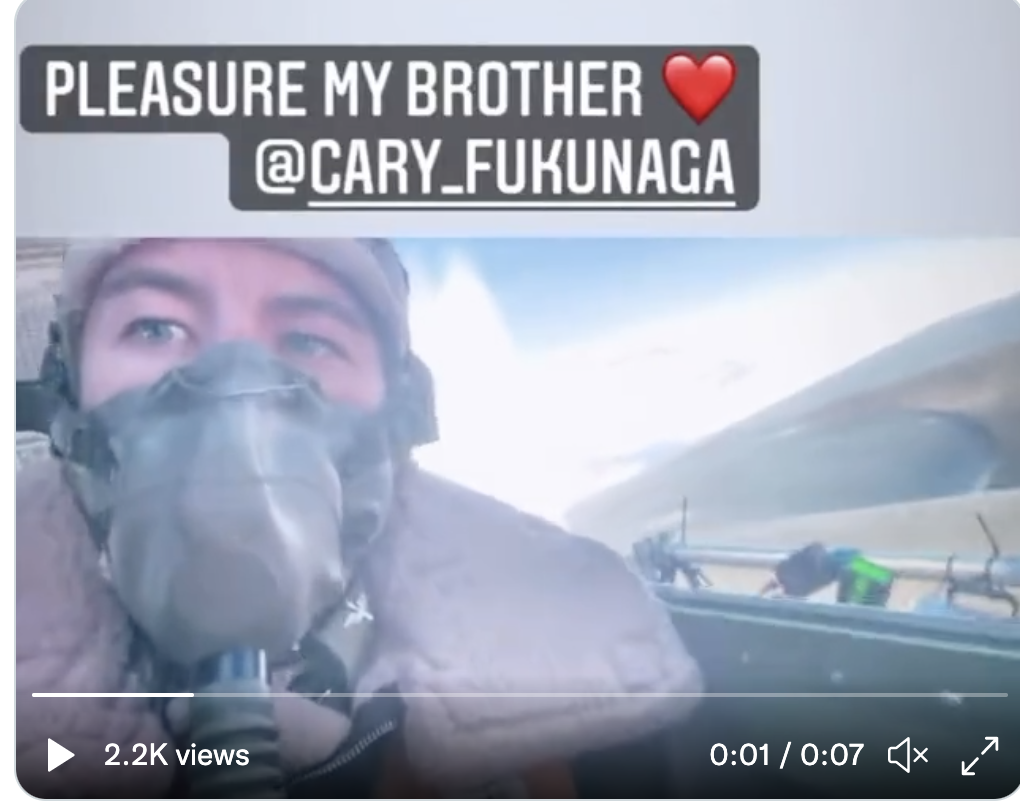 The cockpit of a B-17 constructed for filming. Filmed in circular green screen called “the Volume,” CGI clouds are visible in the background. 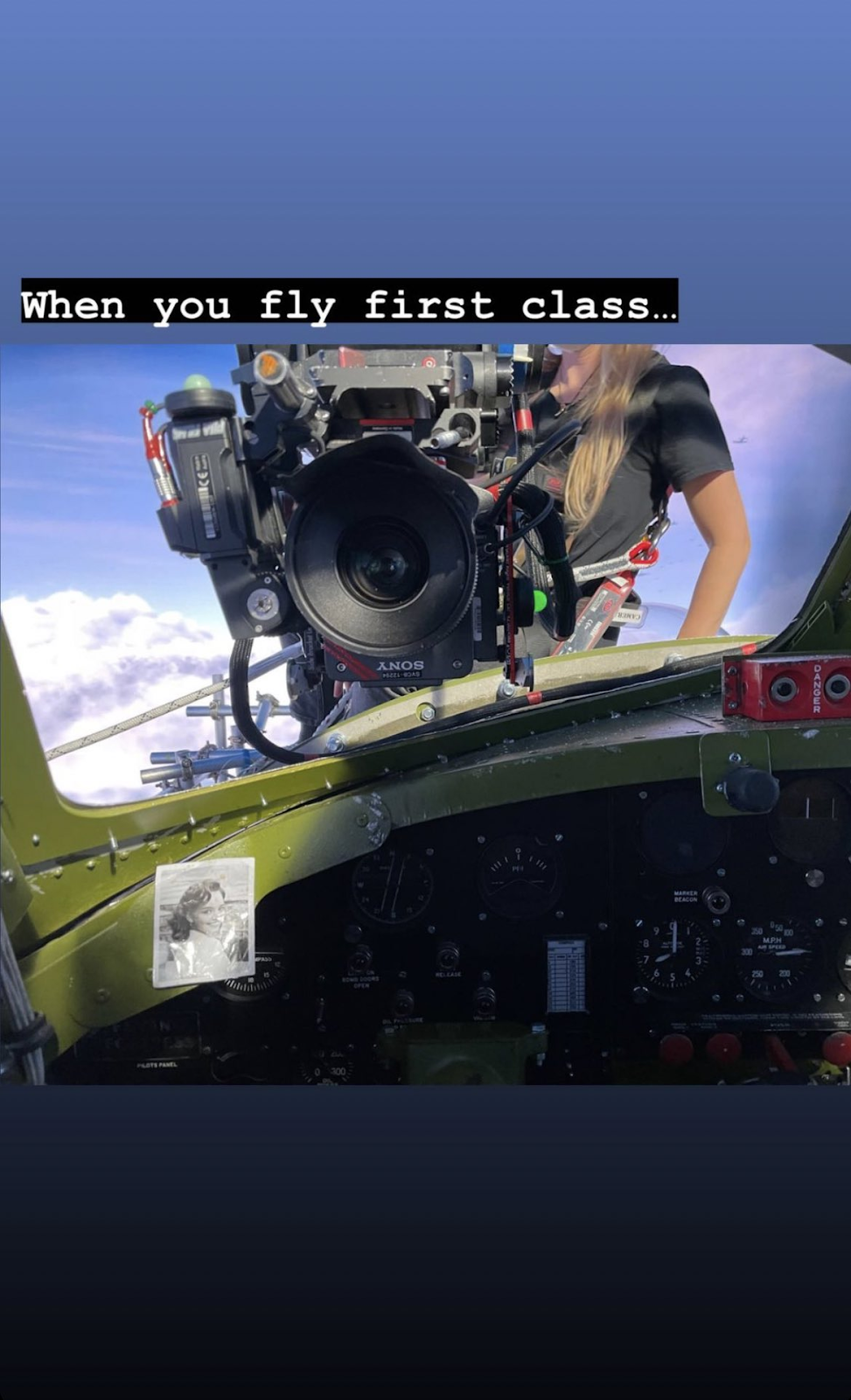 The devil is in the details – and the set designers don’t appear to disappoint: The instrument panel in the cockpit above is a carbon copy of the real thing from WWII. The aluminum above it is scratched and scuffed, like it would’ve been in combat, and a photo of the pilot’s sweetheart is taped in the corner.

COSTUMING FOR A WARTIME MISSION 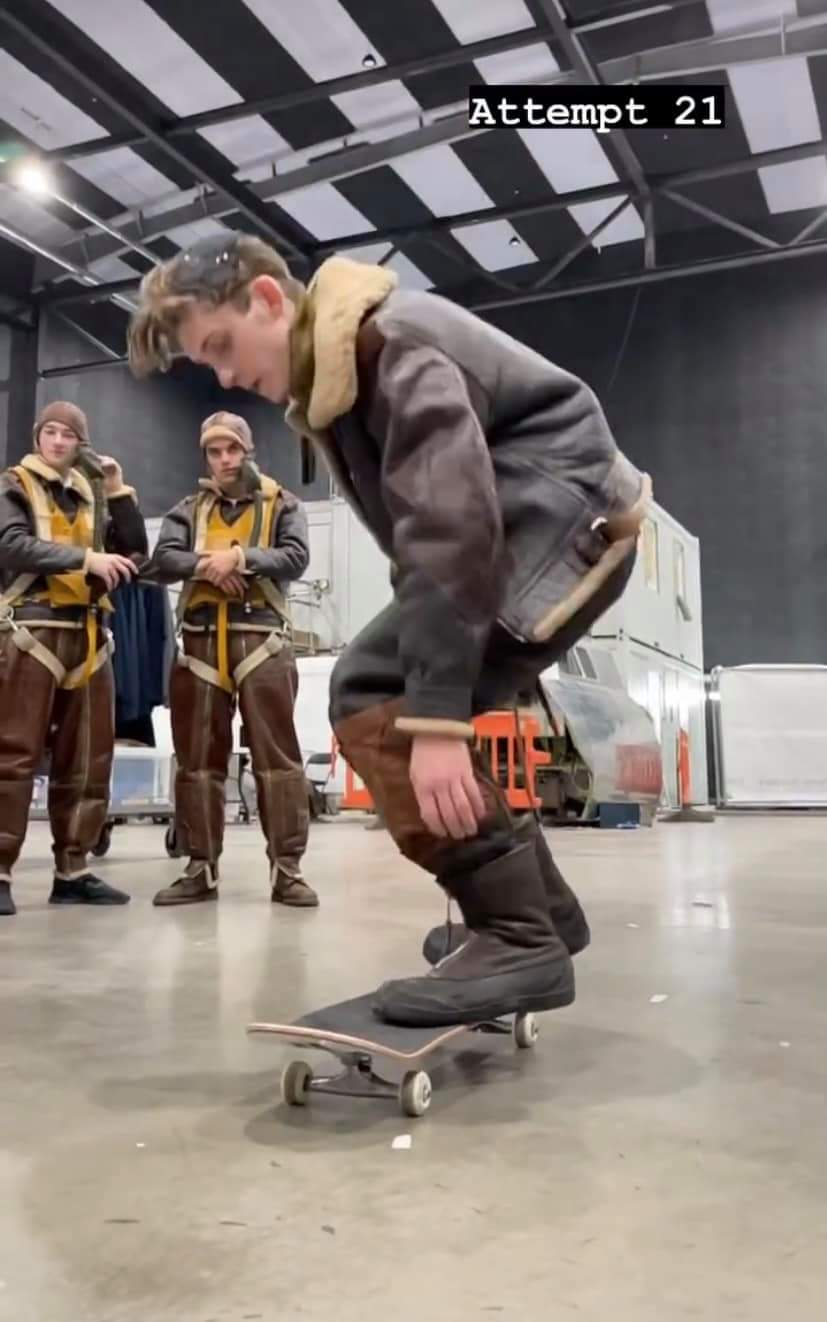 It looks like no stone was left unturned when it comes to costumes. Director Fukunaga posted the three snaps above to his Instagram, showing actors wearing heated flying suits and sheepskins that look remarkably like the real thing.

Above, actor Elliot Warren, who plays James Douglass in the series, wears an A-2 leather jacket and an Officer’s hat. 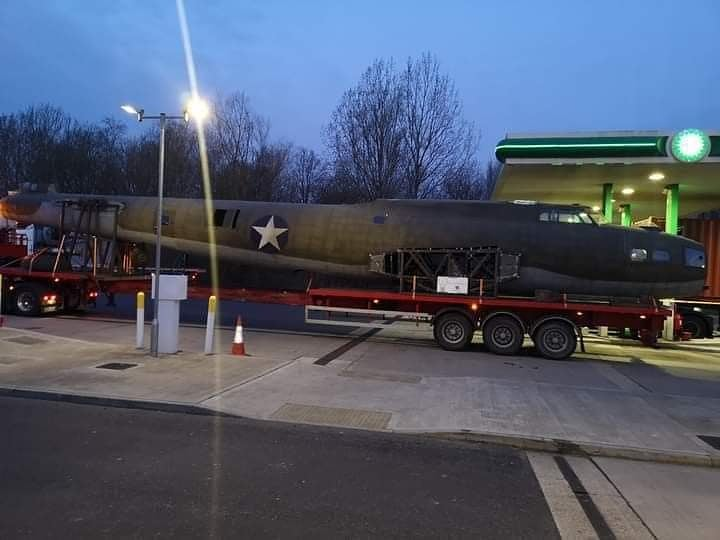 One of two full-sized B-17 replicas – sans wings – fuels up at a gas station in England. The replicas were spotted – with wings – on a set in Abingdon, England. 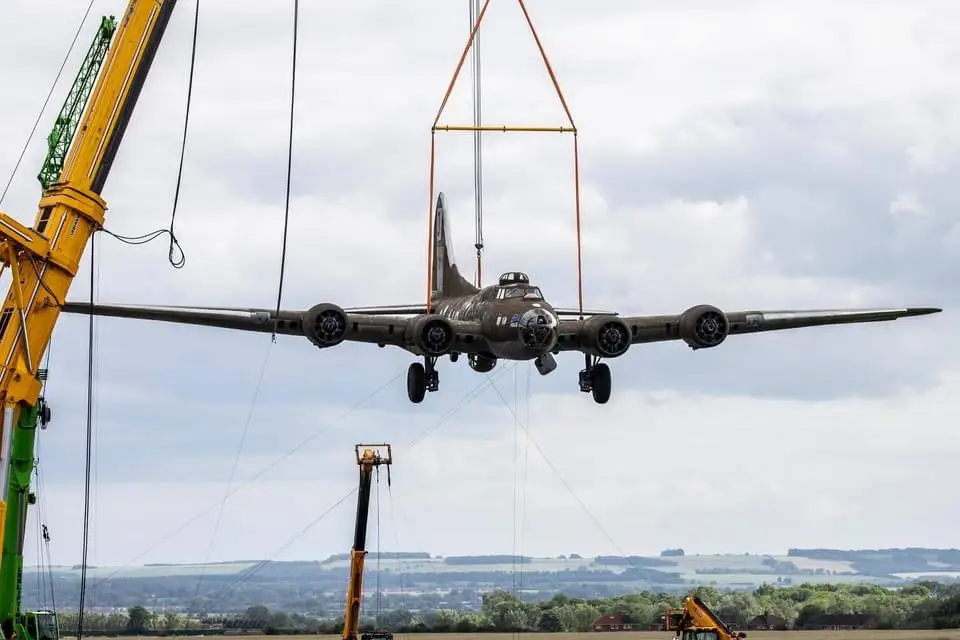 On the Abingdon Airfield set, one of the B-17 replicas is lifted on a crane above the runway to simulate takeoff/landing. Note the props were removed, presumably to be added with CGI later.

A close up of the stationary B-17 rigged above the airfield.

Another view of the B-17 replica lifted above the runway. 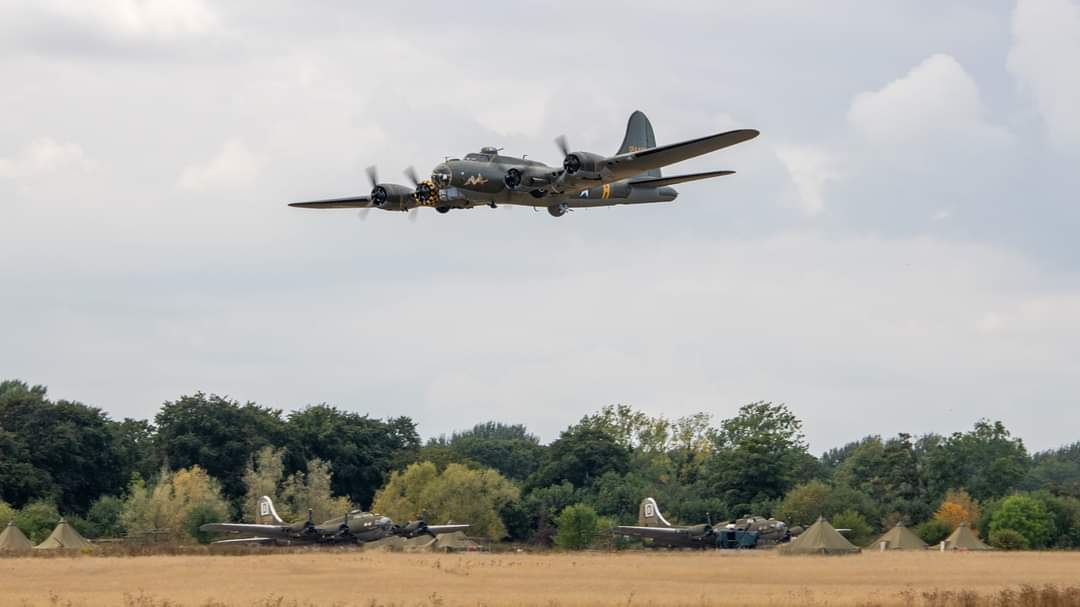 Sally-B, one of the last airworthy B-17s, buzzes the set at Abingdon. 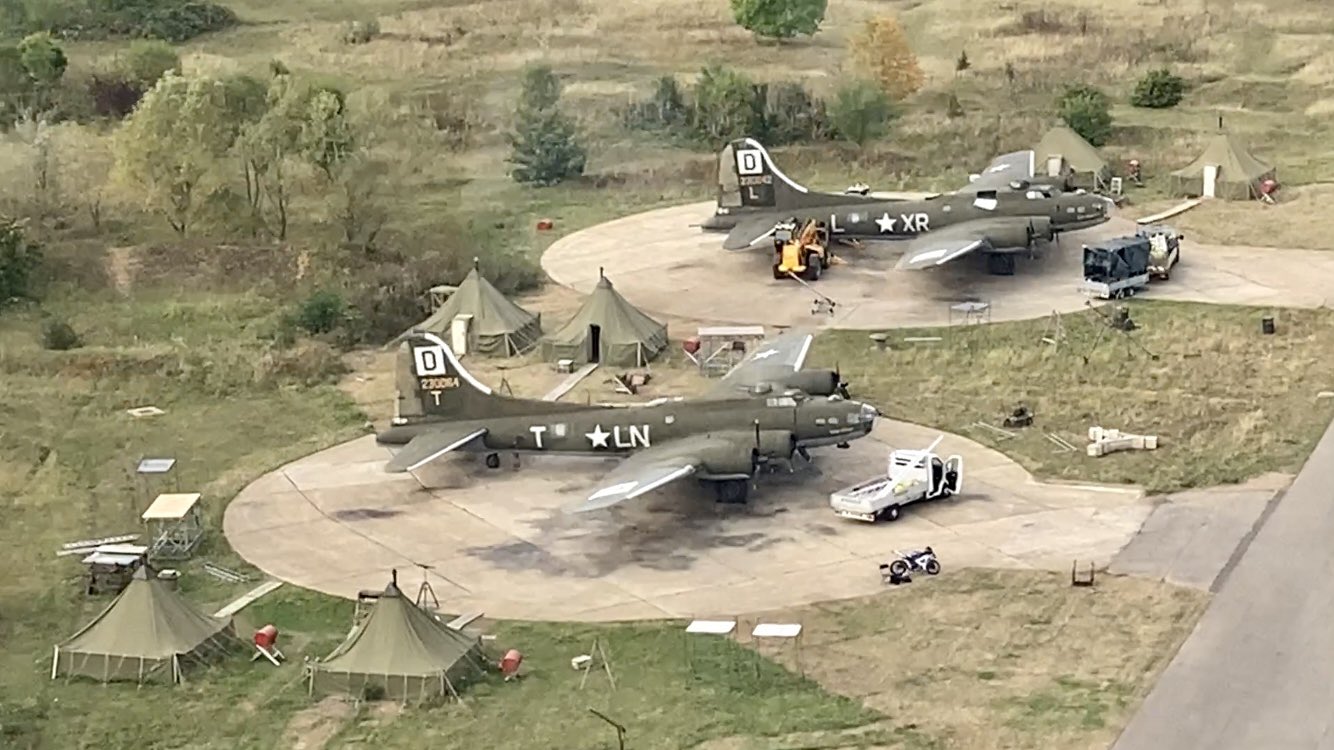 Two hardstands were constructed on the Abingdon set where the replica B-17s were parked. 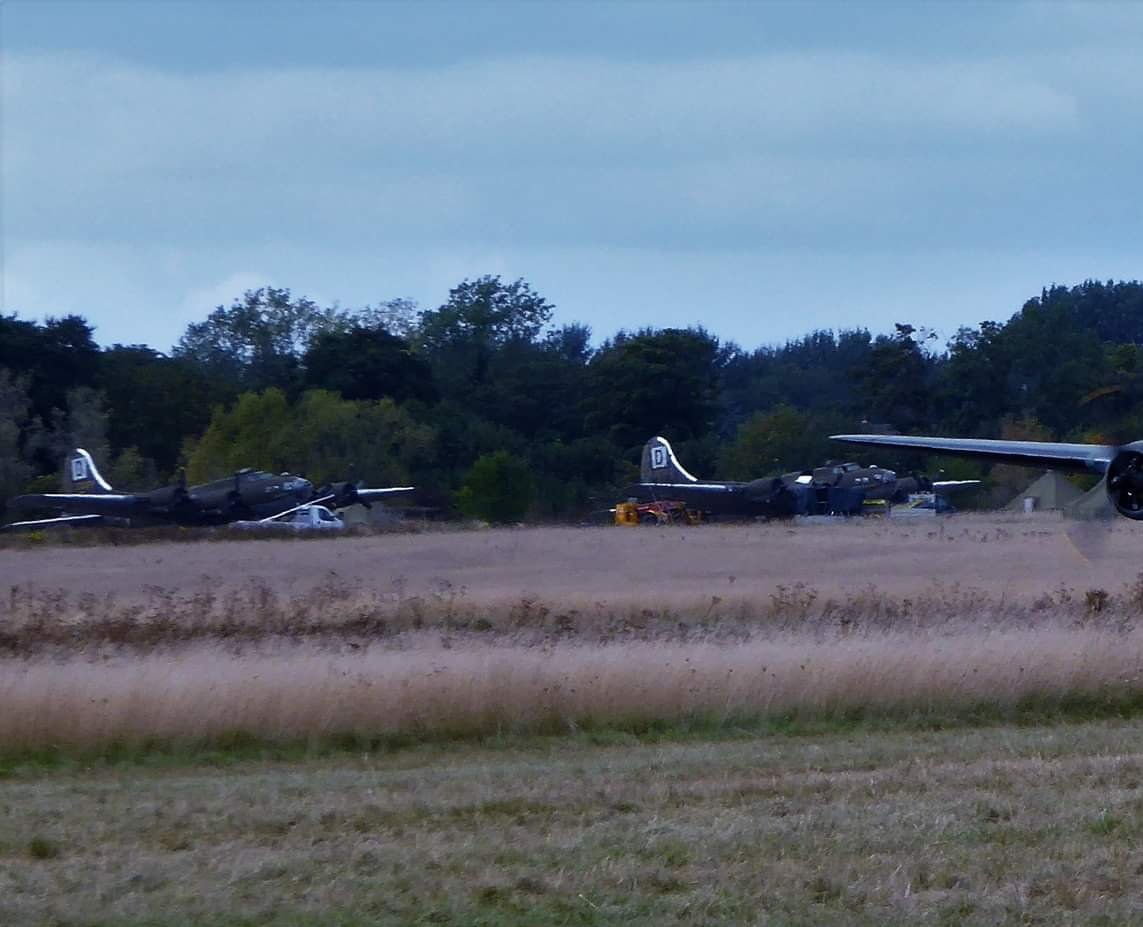 Note the overgrown grass surrounding the hardstands, like it would’ve been in the war. 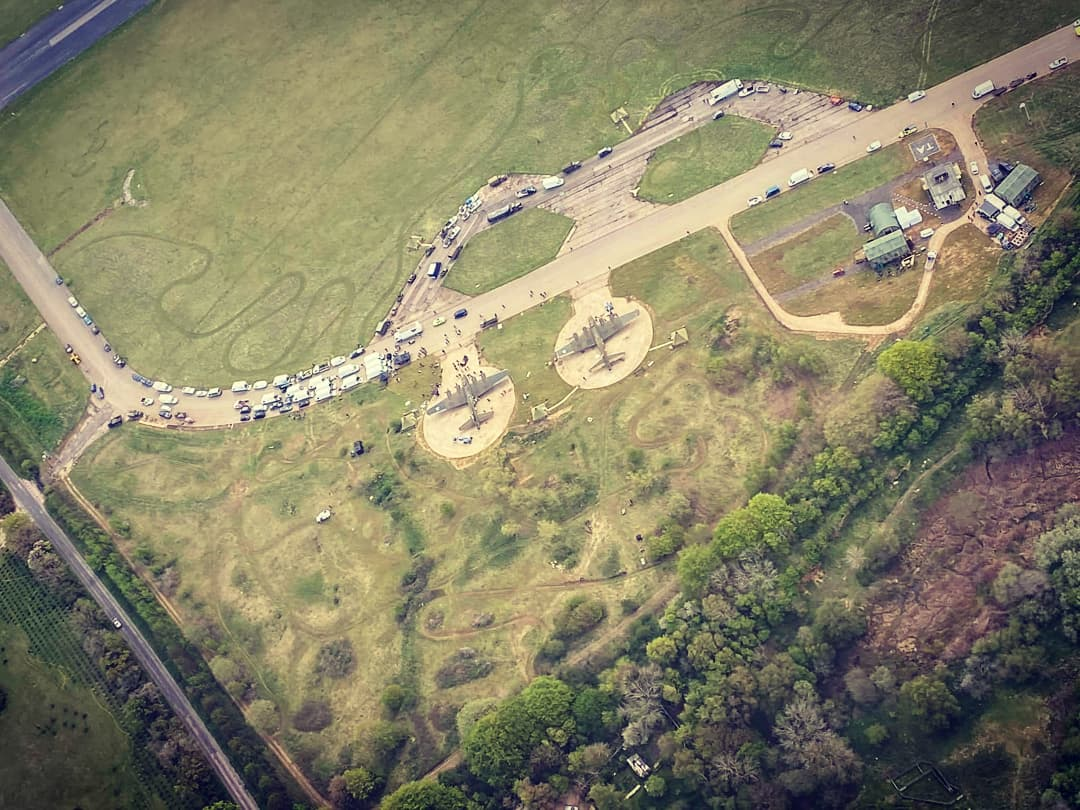 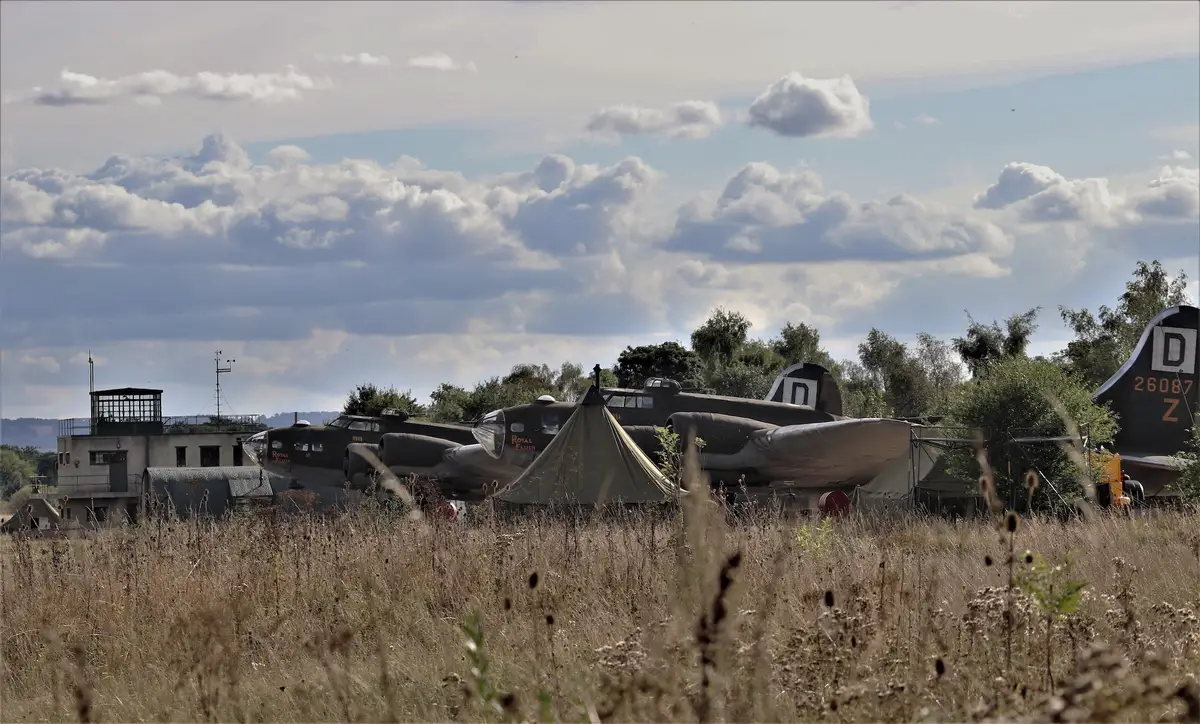 Another view of the hardstands set. The Control Tower constructed for the show is visible in the background. 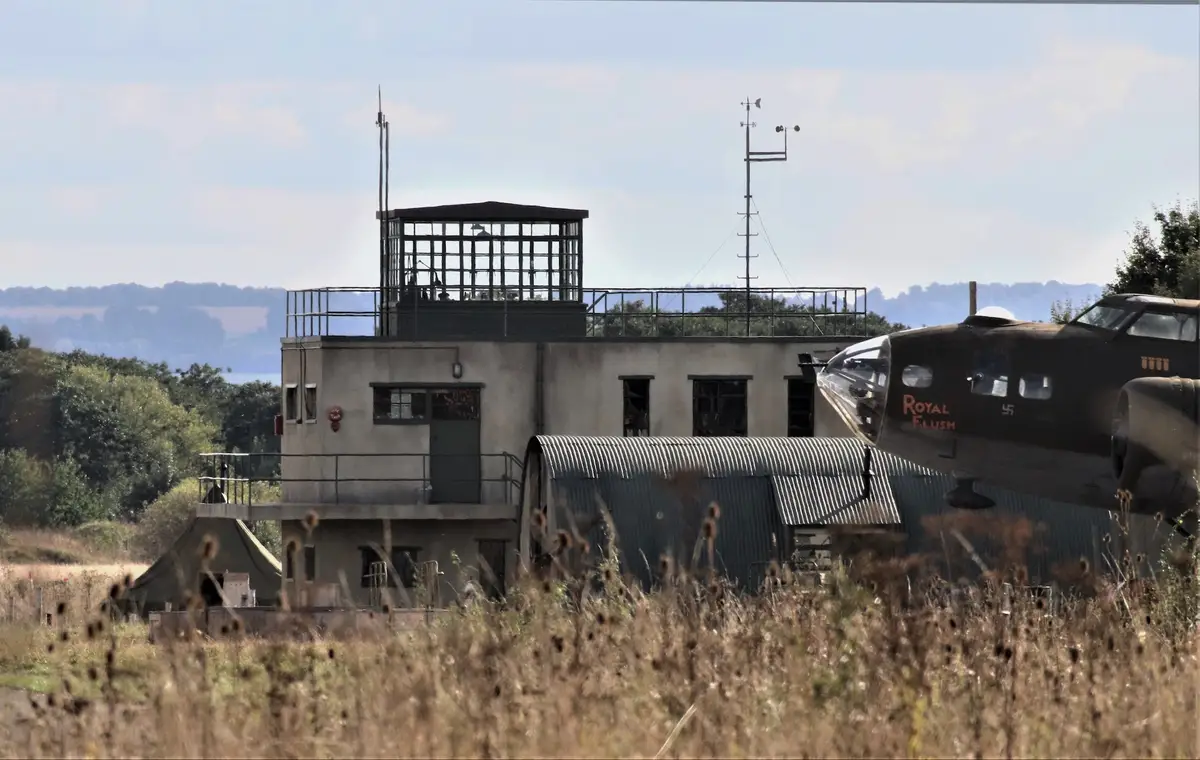 A closer look at the Control Tower.

Additional views of the B-17 replicas parked on the Abingdon set.

One of the B-17 replicas parked on sand-dusted concrete, allegedly for an episode that takes place in North Africa while the 100th BG was on detached service during the war. 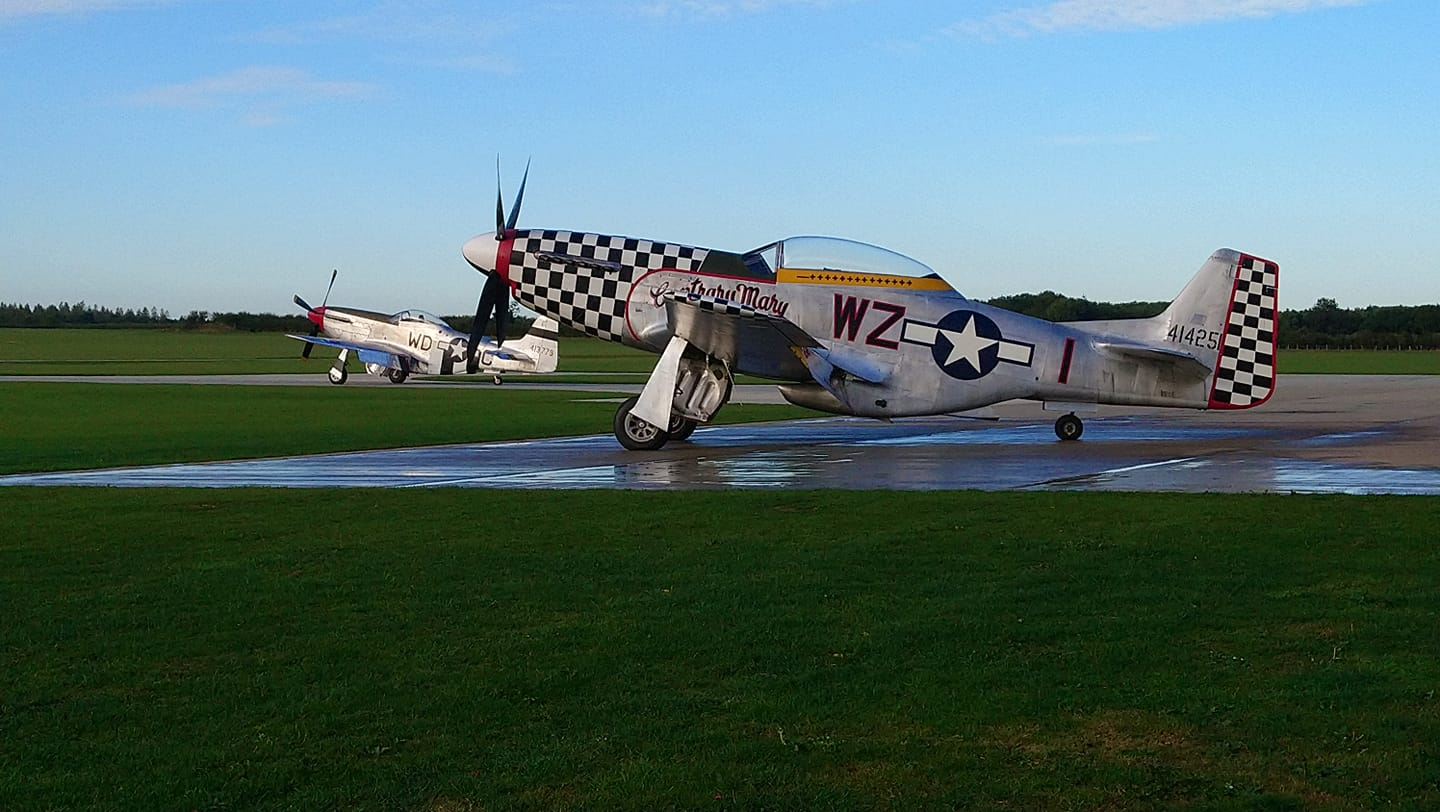 Abingdon residents had an unusual – and reportedly very loud – visitor on an October 2021 afternoon as WWII-era fighters circled the sky. Onlookers allegedly spotted a pair of red-tailed P-51 Mustangs and a Russian-marked Spitfire.

There’s much speculation online about how these fighters will appear in the mini-series. The temporary paint job they were given for the filming that may offer some hints. The iconic red tails left little doubt that these P-51s portray the Tuskegee Airmen. The nose art and markings offer clues about how the fighters may fit into the bomber boys’ story.

Captain Edward Toppins, a near ace with four enemy kills and 141 wartime missions to his name, was the real-life pilot of Topper III, the P-51 above. He’s remembered as one of the greatest Tuskegee flyers, so skilled he was known by name to the Germans.

Margo, the second P-51 pictured in the photos above, didn’t survive the war. Shot down in the summer of 1944 over southern France, her pilot bailed out and became a POW at Stalag Luft III – the same camp that MotA has rebuilt in England for the series.

A day after Margo and Topper III were spotted flying above the set, the red tail paint job was washed away. The final picture in the series above shows the P-51s after their red tails were washed away.

FILMING A B-17 CRASH 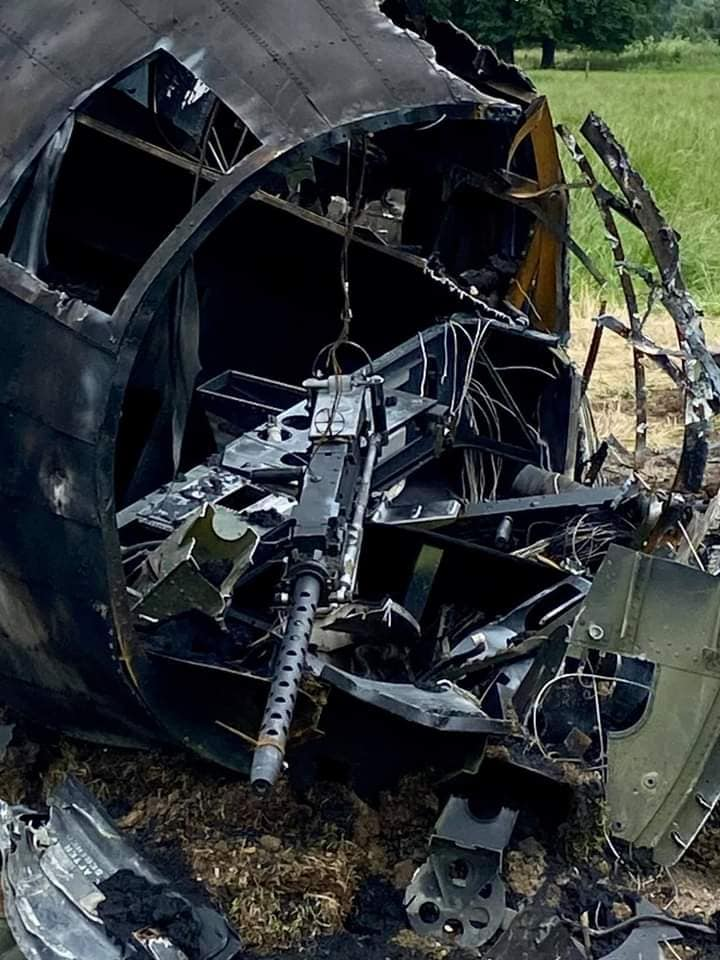 At Bovingdon, the same location of the POW bombed German village set, a burned-out, crashed B-17 nose was photographed. Behind the crash wreckage is the war-torn German town, hinting at a scene depicting a B-17 crew shot down over Germany and captured by German forces. 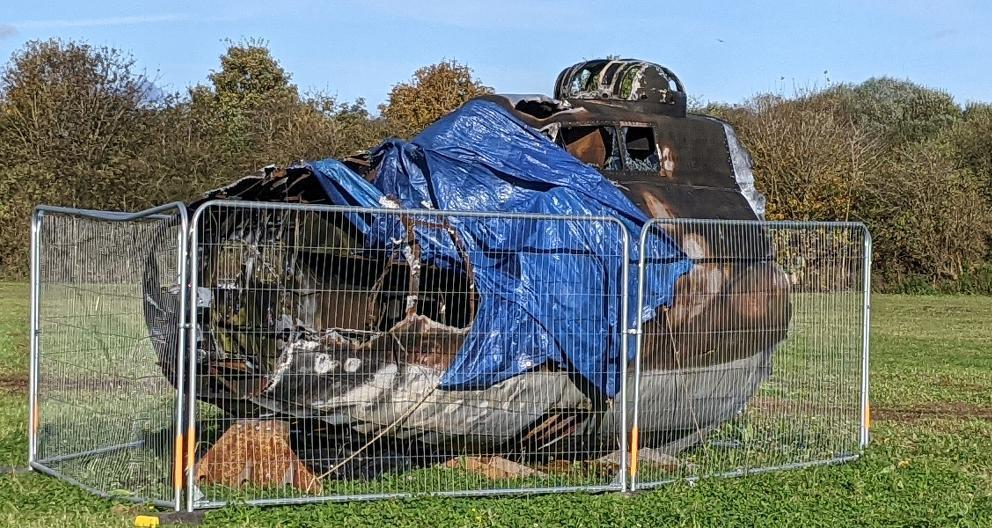 A fence and tarp cover the charred, wrecked B-17 nose when not filming.

The bombed-out German village set is visible in the background. 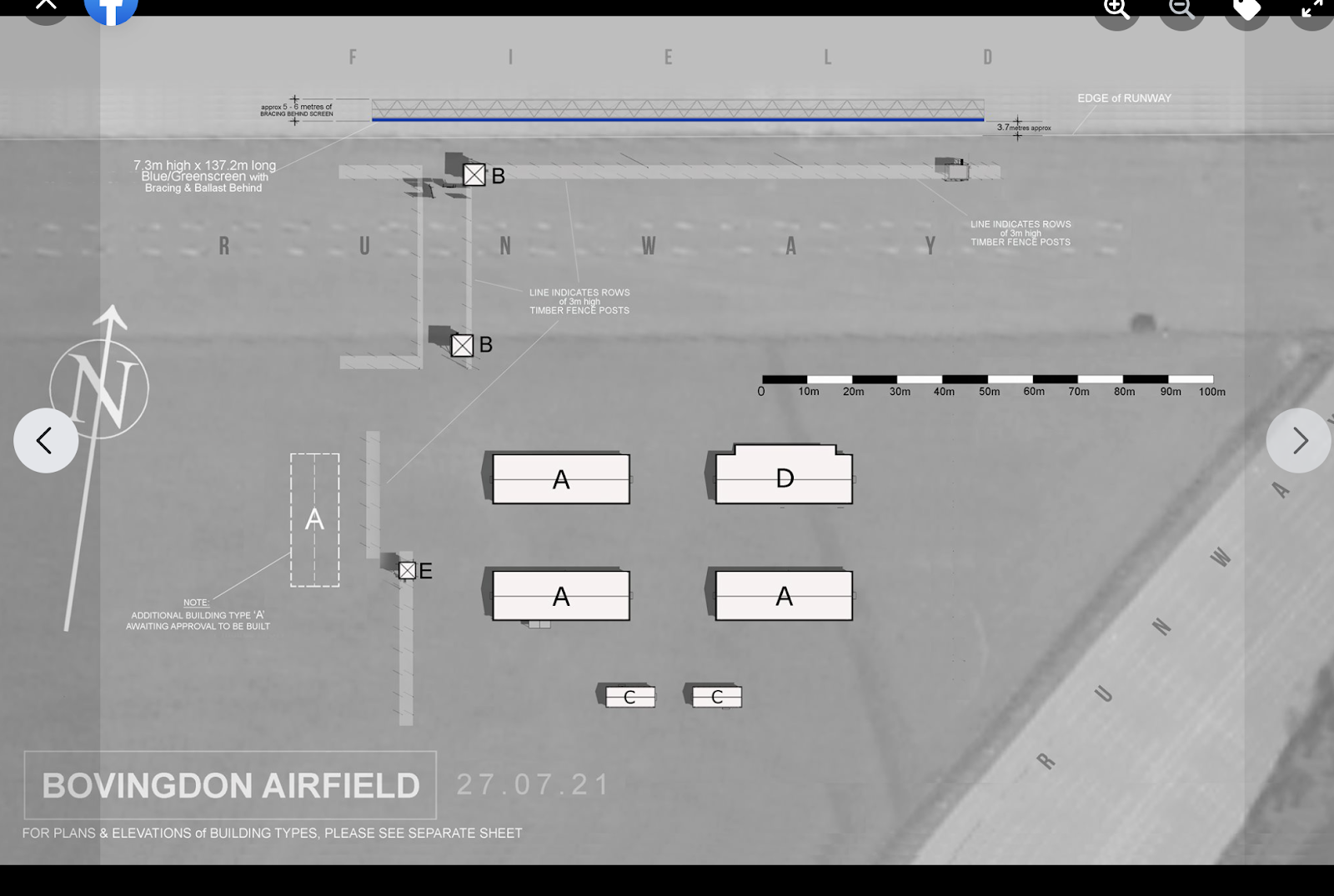 Five million pounds was the cost to reconstruct Stalag Luft III for the mini-series. Production submitted the above building plans to the Borough for approval before production began. 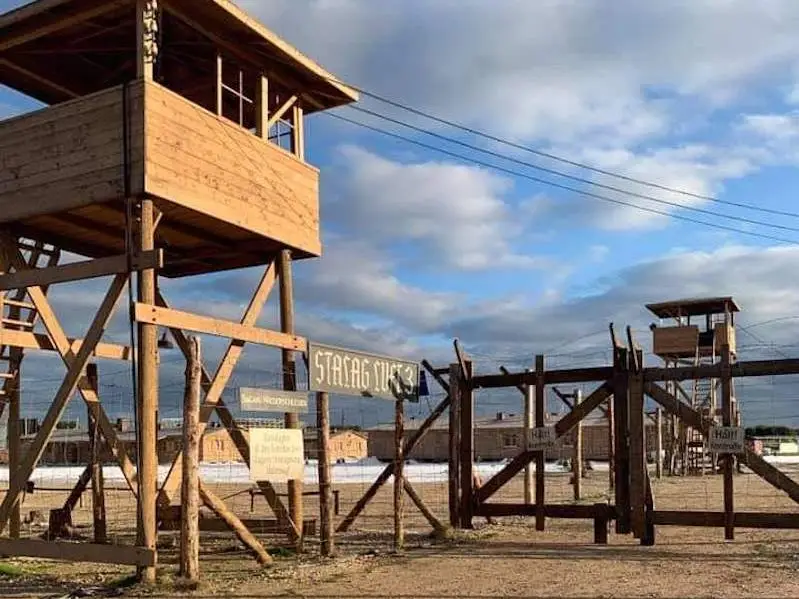 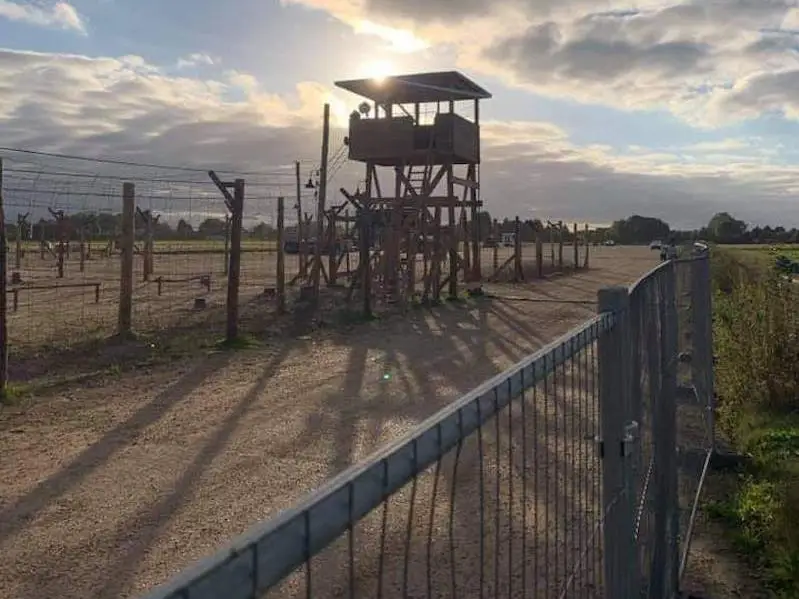 This massive set appears to be a German town hit by bombs or artillery fire. Rubble from destroyed buildings lines the street. 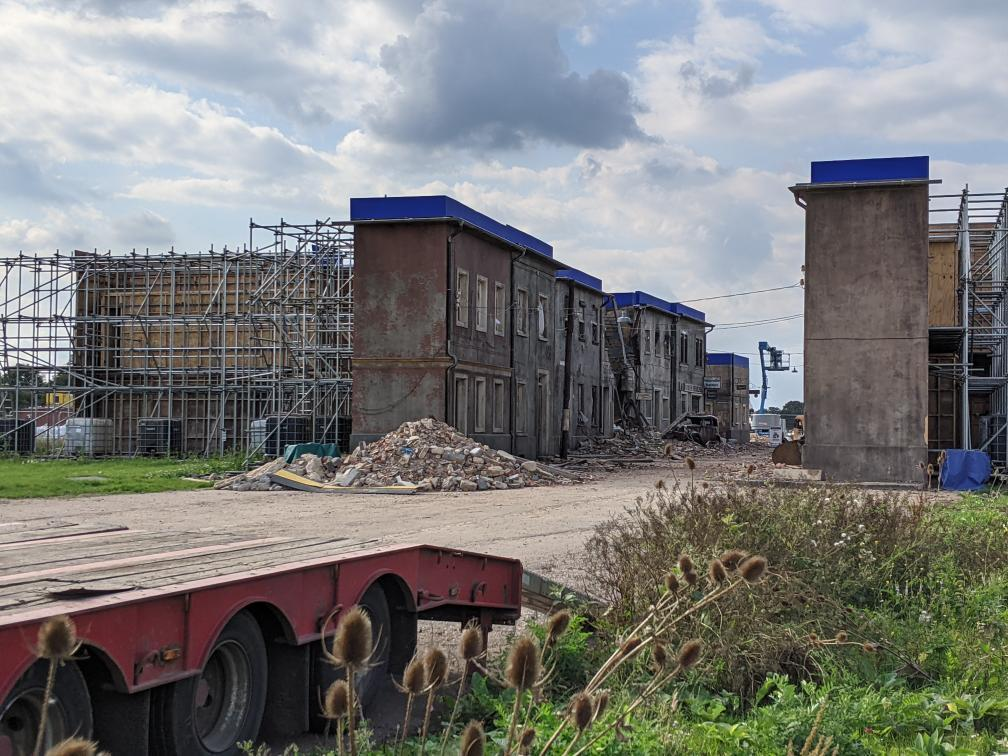 The blue material running atop the structure is likely for CGI/post-production. 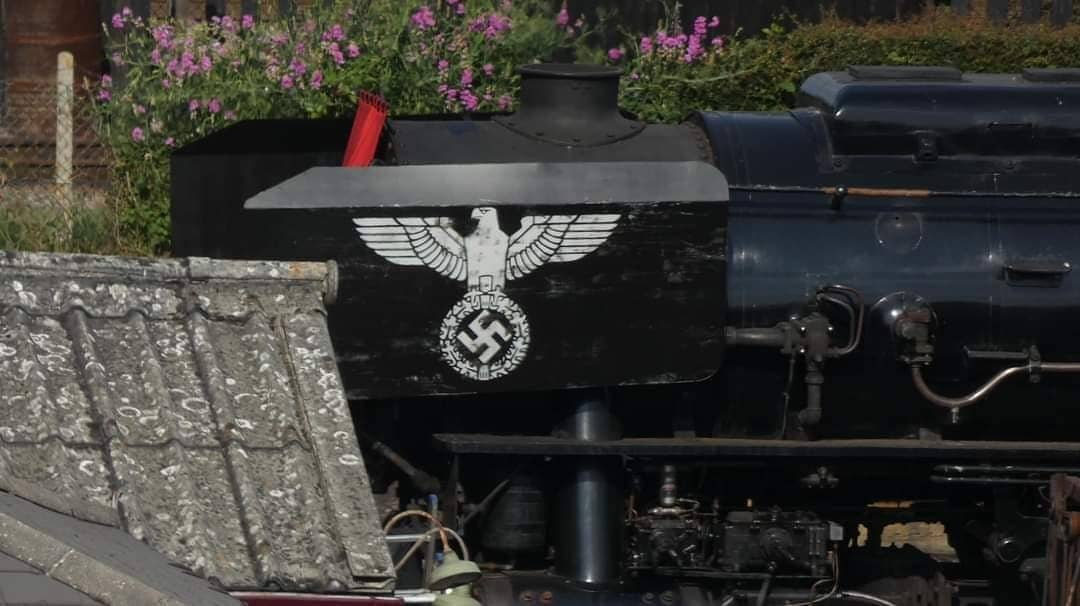 Swastikas were spotted in England 75-year after Hitler was defeated. Above, a Swastika appears on a WWII-era train spotted on set. 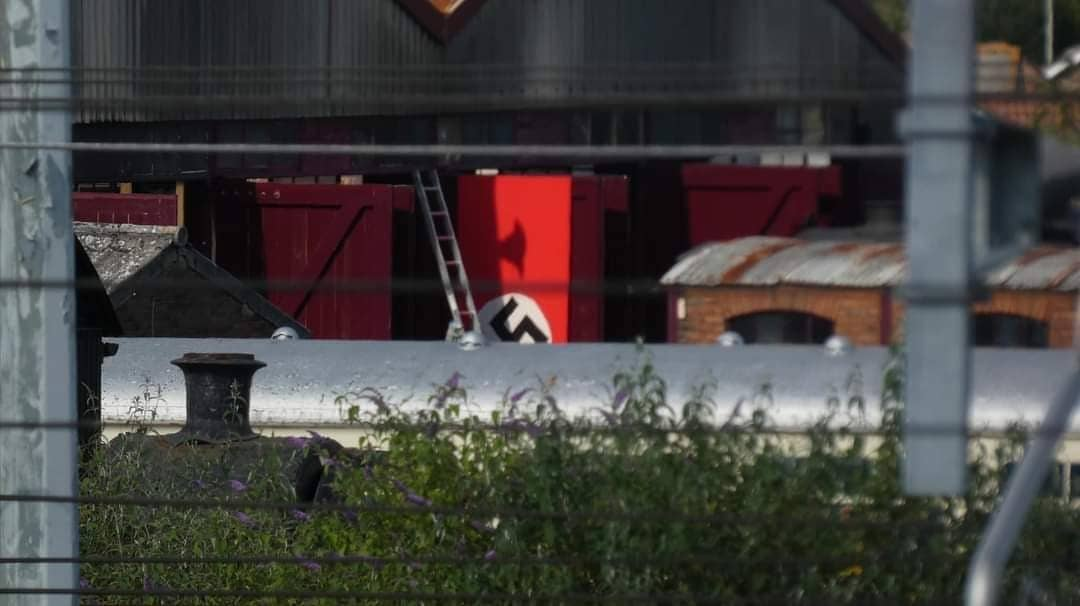 The eponymous red Nazi banner adorned with a Swastika is spotted behind a train car.

While filming at Chiltern Open Air Museum, crates stamped with Swastikas were spotted stacked against a fence. 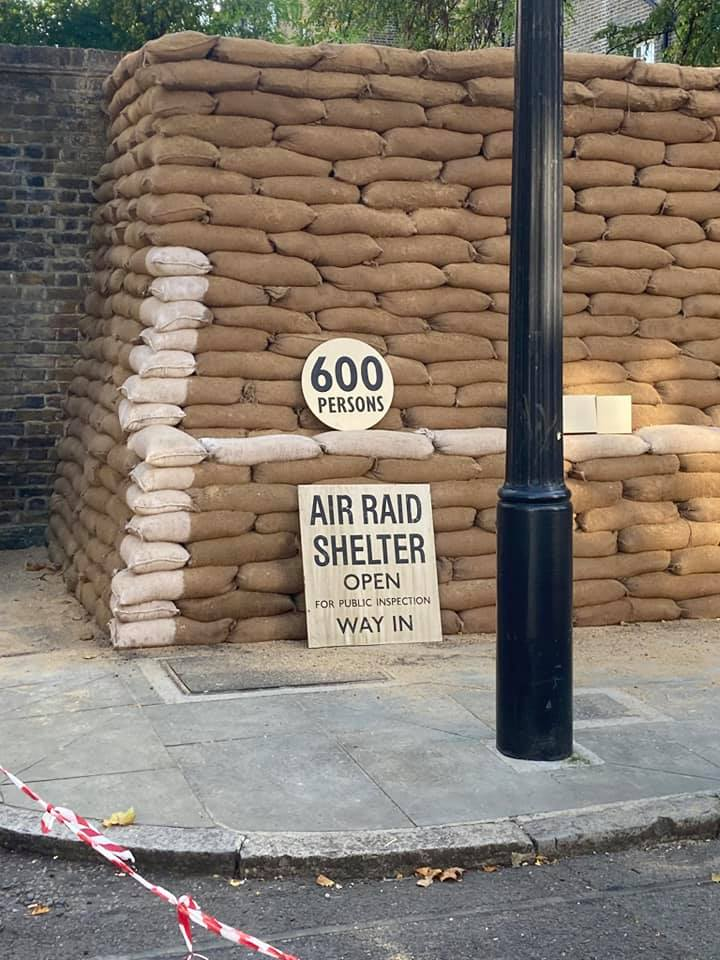 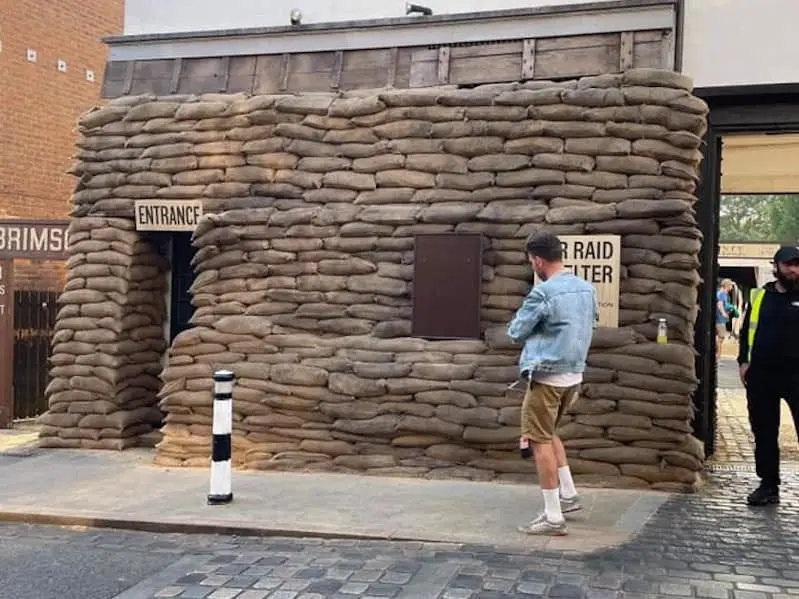 Production isn’t forgetting the primary wartime mode of transit for English and American Airmen alike – a bike – thanks to fuel shortages and many square-mile airbases. A gigantic pile of them was spotted on set. 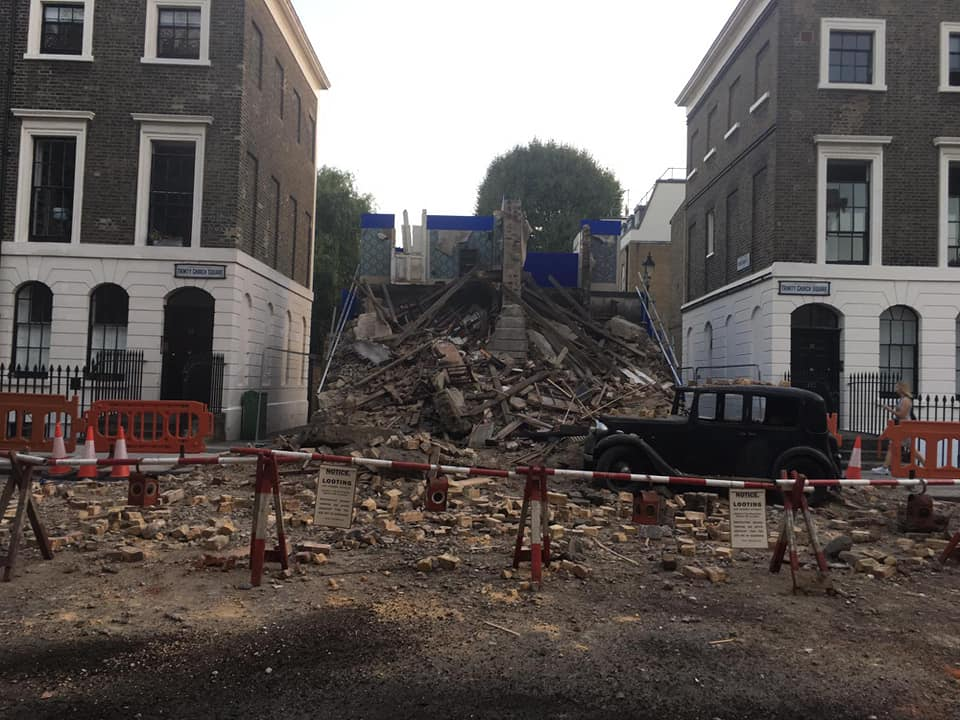 The German bombing campaign against Britain appears to be part of the series, too. The setting is presumably London, but the time period is unknown (ie. destruction from the Battle of Britain or V1/V2 rockets).
The perimeter around the rubble is part of set. The signs hanging from the red and white bar tell passersby that if they steal, they will be punished.
The blue backdrop in the photo above is likely for CGI so the set can be blended in with neighboring buildings in post-production. The devil’s in the details, and production appears to be knocking it out of the park. They’ve recreated dozens of wartime newspaper headlines. The papers don’t give away a date, but headlines detail an RAF nighttime raid on Stuttgart, the Italian fleet shelling their foe in Yugoslavia, and Russia gaining traction.

The Gist: The author was a kid in california when pearl harbor happened. in this piece, he churns up memories from the wake of pearl harbor – including japanese internment camps. Poignant lessons for the pandemic years.

The Gist: An epic tale of an 8th Air Force pilot who bombed Berlin, went down over Russia, and repaired his own bomber – hauling a B-17 engine on a tractor and hoisting it up with telephone poles to flee the Soviets. Then, he came home and built a faux fir empire.

A formation of 44th BG B-24s, taken from the waist window of a bomber
Airmen and ground crews of the 44th Bomb Group gather around the American Red Cross Clubmobile adjacent the runway. ✈️
The number of combat missions flown by a B-24J is denoted on its fuselage, as shown here. Each hash mark is in the shape of a bomb and is painted after a successful return to Shipdham Airfield. ⁠
B-24 Q for Queenie of the 44th Bomb Group was assigned to Sub Patrol missions during the summer of 1943.⁠
Sugar Baby, a P-47 fighter, is inspected by heavy bomber crews after an emergency landing at a B-24 base in East Anglia. ⁠
Carlos Villar with Booty the dog at Shipdham Airfield during WWII.⁠
American airmen at a heavy bomber base in East Anglia read "Stars and Stripes" and drink soda outside the American Red Cross Club in the few warm days of summer. ⁠
A B-24 flies low over one of the T-2 hangar at Shipdham Airfield on return from a mission.